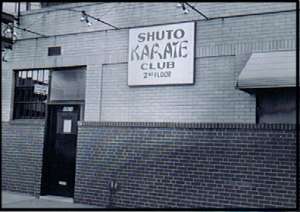 In 1960, a fire caused the school to be relocated to 119 W. Chelten Avenue in the Germantown section of Philadelphia.  During this time, the only other Shotokan karate school was located only a block away; it was operated by Teruyuki Okazaki of the Japan Karate Association (JKA).  In 1962, Shuto Karate Club became a member of the JKA, but left that organization in 1966.  That year, Rabouin Sensei was approached to join the United States Chito Kai and took his third dan exam in August of 1968.

During the 1960’s, Shuto Karate Club was instrumental in spreading and promoting karate throughout the northeastern United States.  This occurred through demonstrations held at schools, businesses, and recreation centers.  Louis Rabouin was named Chito Kai’s East Coast Director of the All Japan Karate-Do Federation in 1970.

Larry Flournoy Sensei joined Shuto Karate Club in 1964 and obtained his Shodan rank in 1968. He opened his own school in 1972 in Phoenixville, PA. ( In 2007, Flournoy Sensei would be named charter holder and Chief Instructor of Shuto Karate Club, as well as president of the ASDKA.)   After the first school opened at the YMCA on Main Street, it moved another two times until it opened on the lower level of the Daily Republican newspaper on Bridge Street.

Nate Sparrow had also joined Shuto Karate Club in 1964 and was the first student promoted to Shodan.  Sparrow Sensei headed the Kendrick Recreation Center Karate Club until his death in 1997.

In 1976, Shuto Karate Club on Chelten Ave had to close.  Rabouin Sensei moved the school to 7706 Castor Ave, but unfortunately the school had to be closed within two years.  Rabouin Sensei conducted seminars and acted as a technical advisor for various karate schools.  In 2004, Rabouin Sensei was awarded a commendation by the Pennsylvania State Senate for his lifetime dedication to karate.

In 2007, Flournoy Sensei was named the head of Shuto Karate Club, and his dojo at 225 Bridge Street was headquarters.

Robert Trotta Sensei was designated head of a new branch of Shuto Karate Club, originally located in Hatfield, PA.  This eventually relocated to its current location in Sellersville, PA. The head instructor for Sellersville location is Michael Lapreziosa, who has been training with Shuto Karate Club since 2009. He assumed ownership of this club in April 2018.  In 2017, Trotta Sensei had already opened another location in Kutztown, PA.

On November 21, 2010 fifty martial artist gathered to celebrate the 50th anniversary of the opening of the first karate school in Philadelphia, PA.  Louis Rabouin Sensei passed away on August 15, 2011.  Shuto Karate Club and AKSDA live on through their three present schools, located in Skippack (Flournoy Shihan) Kutztown (Trotta Shihan), and Sellersville (Lapreziosa Sensei).

[Update January 2019: Trotta Sensei has retired from running karate schools and has closed the Kutztown club. He has nearly 50 years karate and aikido experience, and many decades of running his own schools. He will continue to be a guest teacher and seminar leader at the Sellersville location. Look for a special page about his karate career on this site.]

For a detailed story of the founding and early years of Shuto Karate Club, visit the Club History page on the website of our headquarters dojo.