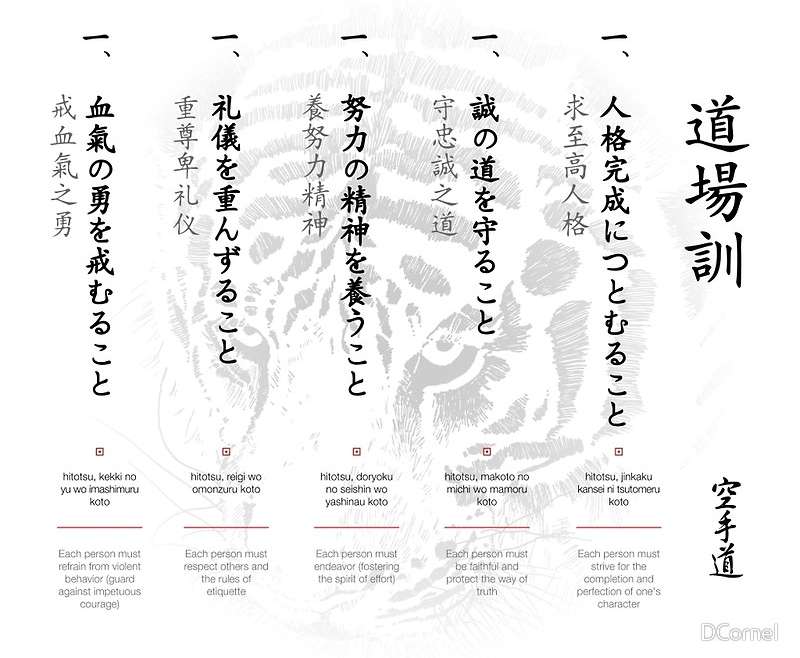 Generally credited to Gichin Funakoshi (but rumored to have been created by Kanga Sakukawa, an 18th-century Okinawan karate proponent), the Shotokan Karate “dojo kun” serves as a set of five guiding principles, recited at the start/end of each training session in most Shotokan organizations. The dojo kun is intended to frame the practice within an ethical context.

The five rules are shown below. Note that “hitotsu” in Japanese means “one” or in a slang way, “firstly.” So when the dojo kun is recited in Japanese, “hitotsu” said before each principle is meant to show that they are all of equal importance.

Also, note below that Shuto Karate Sellersville has added “myself” to the fourth principle in the dojo kun, “Respect others.”

Be faithful
一、誠の道を守ること
hitotsu, makoto no michi wo mamoru koto
makoto = truth, no = ‘s, michi = path, wo = with respect to that, mamoru = defend

Refrain from violent behavior
一、血気の勇を戒むること
hitotsu, kekki no yū wo imashimuru koto
kekki = vigor (impetuousness), no = of, yu = courage, wo = with respect to that, imashimuru = refrain