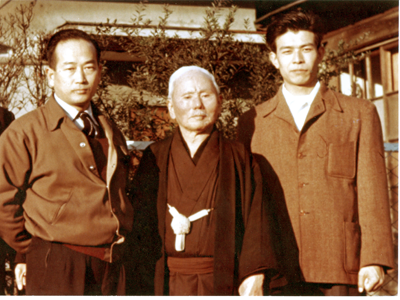 Shotokan Karate has lost two of its 10th-dan masters in the last 5 months. Both were 88 years old. Kanazawa Hirokazu died in Japan on December 8. And this past Tuesday (April 21), Okazaki Teruyuki also passed away.

I had the pleasure of taking a class from Kanazawa Sensei at a Martial Arts weekend seminar at the International Budo University in Chiba city, Japan in 1993. He vividly demonstrated muscle control in his hara (abdomen) to absorb and even interrupt stepping thrust punches from a very large guy with a black belt. He kindly posed for a photo with me and a friend also at the seminar.

I actually got to know Okazaki Sensei during the time I trained at ISKF headquarters in West Philadelphia, from early 1987 through late 1989. I never took a class from him, because I started from white belt and worked up to brown belt there, and he only taught black belt classes at that time. There were so many black belt instructors there that he hardly had a need to teach at all. I remember the classes there well; as a beginner it was both inspiring and intimidating to be lined up in seiza and, in the line in front of the lower belts, there would be 10 or 12 tough black belts.  Hierarchy and rituals were strictly observed, as if we were in Japan. Practicing there was the toughest training I’ve ever had, and I loved it.

I did get to know Okazaki Sensei, though, because I worked in the dojo office for a while in exchange for my dues. I was getting a Master’s Degree at Drexel at the time, and for one class I made a documentary video on Shotokan Karate. He graciously allowed me to film in the dojo, including a black-belt class, which I otherwise would not have been allowed to watch. It was the only time I saw him teach. He also allowed me to interview him in his office. To return the favor, I took the official video for the 1988 ISKF national tournament, which was held at Temple University. I still have those old VHS videos of that tournament.

He impressed me as an amiable and gentle man, with an easy laugh and smile. His karate reputation and the success of the organization he founded in Philadelphia are well-known. He had no children, but his nephew Hiroshi, who is now President of the ISKF and a 10th dan, trained there often.

Okazaki Sensei was known in his more youthful days for his amazing high kicks and tobi-geri, i.e., flying kicks. His motto, as I understood it at the time, was simple: “Keep training.” RIP Sensei.