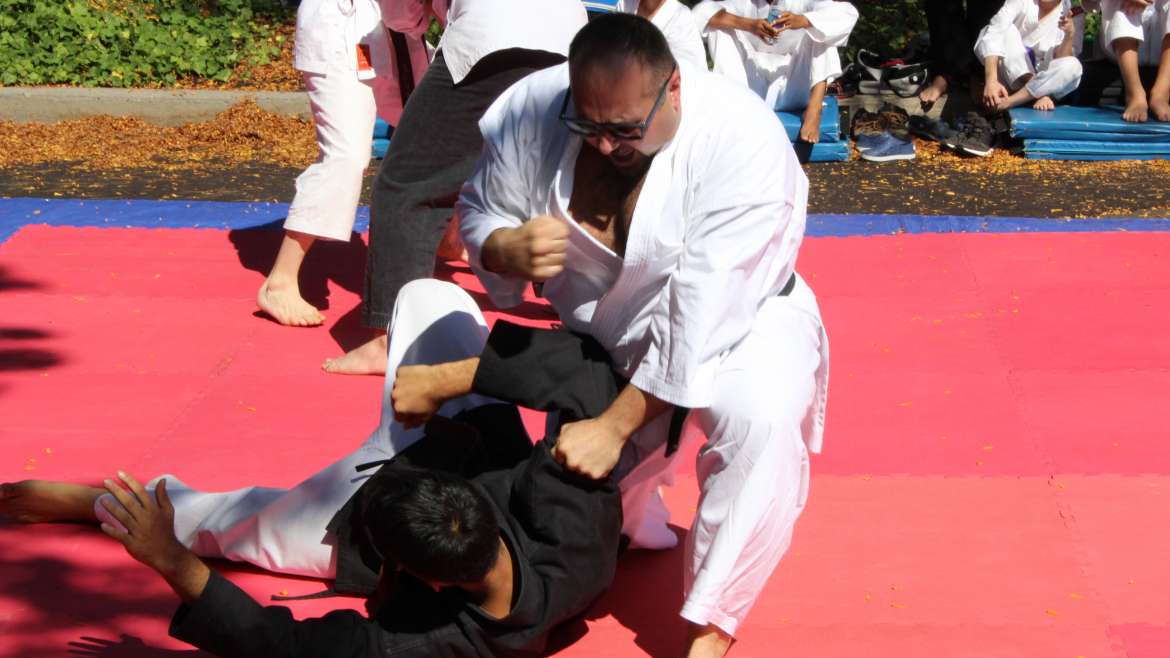 Both Delguidice Sensei and I came up through the karate ranks and earned our black belts learning Shotokan Karate the “traditional Japanese” way. And I actually trained for three years in Japan and earned a 2nd degree black belt through the “Kenshinkai” organization, which was definitely traditional Japanese. (For those who want to know, “kai” in this context indicates an association or organization, and “kenshin” in this case means ‘spirit of the fist.” So, “fist spirit association.”)

“Traditional Japanese” means several things, but for the purpose of this post it means that you learn to block, parry, punch, strike and kick as if you are being attacked by another karate player. They lunge at you with karate techniques and you respond with karate techniques, or vice versa. This was a change made to the original Okinawan styles in the first half of the twentieth century as they were being introduced into Japan and adapted for instruction to school students on a mass basis, as a form of physical education. The …fierceness or ferocity…for lack of better words, was stripped out or covered with stylized, sometimes grand movements more suitable for body development and a competitive sport, which karate became after World War II.

The real-life combative aspects were concealed, sometimes with mystical interpretations of the techniques. In time, the original meanings of the movements were largely lost. And this is not much of a detriment in Japan, where then, as now, street crime was remarkably low by our standards. It’s a very safe place and few people would feel any need to practice karate for self-defense purposes.

I joined Shuto Karate Club in 2009 after a 10-year hiatus from the martial arts. What attracted me most was the practical, no-nonsense interpretations of Shotokan karate teachings. Here in the U.S., most adults want to learn to protect themselves from the threat of aggressive violence as part of their martial arts training. My teachers, Robert Trotta and Larry Flournoy, drew from their life experiences to teach karate in a way that could be applied to actual physical confrontations outside of the dojo. (Trotta Shihan used to call his instruction “Shotokan based” to emphasize he did not stick to the standard Shotokan intepretations; Flournoy Shihan does not teach Shotokan at all, but blends original Okinawan versions with jiu-jitsu teachings.)

When I began regularly teaching under Trotta Shihan about 7 or 8 years ago, I wanted to blend the traditional with the practical, as my teacher had modeled for me, and started to devise my own methods for teaching in that way. I began to study what others were doing around the (English-speaking) world via books, DVDs, and the Internet, as well as continuing to learn from Trotta Shihan. That of course continued as I gradually assumed most of the teaching responsibility during late 2016-early 2017 and was given the Sellersville school in April 2018.

I lack the type of life experiences that my Shuto Karate Club sensei have, but I have an aptitude for learning from a wide variety of high-quality sources and finding ways to convey the best knowledge to others via teaching. This applies to other things besides karate, but I am passionate about teaching karate for self-defense.

Our type of training is important, because criminal violence is a reality in the U.S., and although some areas certainly have much lower crime rates than others, violent predators sometimes have the agency and ability to strike in what were thought to be “safe” areas, because, after all, this is where people often have their guard down and make better targets. I don’t have any data for this, but my sense is that crimes in broad daylight and in public are becoming more common. I believe that in the near to medium-term future, street crime will become a larger factor in more places in the U.S.

There is no panacea and no way to make yourself completely safe, aside from staying behind locked doors in your home. As soon as you venture out in your vehicle, on public transportation, or on foot, your risk level takes a big jump. C’est la vie*, and there’s no need to live in a state of anxiety. Good martial arts training will not provide you with 100% safety, but it will increase your chances of avoiding physical attack and surviving it if it can’t be avoided. Even if a weapon is involved, you can increase your chances of surviving, and that’s why we train (among other reasons).

* In Japanese, the phrase is sho ga nai.

Philosophically speaking, as I have stated elsewhere on this blog, I think that good people should carry on their person at least one “force multiplier,” i.e., weapon, when they are out and about in public. And thank heaven we can still do this in most places in the U.S. — although that right is perpetually under political threat. (Our counterparts in England, for instance, cannot even carry a knife for defense, and perhaps this is why so much of the great empty-hand “combatives” teaching has come out of the U.K.) However, I equally believe that all good persons should also develop empty-handed combat skills, in whatever form and not necessarily from karate. The human body is an arsenal of natural weapons that can be used for protecting self and others when a “force multiplier” is not immediately available. And anyone can increase their confidence and actual level of protection with some amount of good-quality instruction and serious practice.

As those who have talked with me about it know, I have a vision for how adults training in our club could be, including methods for teaching “practical karate” and some instruction modules already set to go. We are just awaiting the numbers.