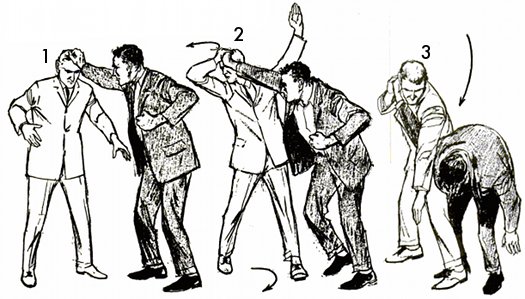 This is the final post in an eight-part series on the necessary components of a successful plea of “self-defense” in the case where a person has had to employ lethal force to protect himself or others* from harm. This “self-defense” type of legal defense normally comes up in cases when a person uses a weapon, particularly a firearm, to kill or injure another person, but because martial artists develop skills in using their bodies and/or improvised weapons to cause bodily harm to other people, it can easily apply to what we do as well. In any case, I consider familiarity with the law in one’s own nation and locality to be essential to a martial artist’s training and the development of his or her personal “use of force doctrine.”

Suppose you had an encounter with another person, outside of your home or workplace, that started as, or escalated to, a violent physical confrontation and resulted in you using your martial arts training to cause substantial injury to the person. Will you be convicted of battery (misdemeanor or felony), or even charged or arrested? Assuming you are being judged fairly by the legal system, this will depend on whether or not your actions met a set of five requirements. Those five requirements, or what we’ve been calling the five elements of a successful claim of “self-defense,” are what we have covered in this series of posts. In so doing we have drawn from Andrew Branca’s book “The Law of Self Defense” (3rd edition).

We also looked at the language of Pennsylvania law as it applies to “self defense.” Most states define the concepts in the same or similar ways. Lethal force is that which, “…under the circumstances in which it is used, is readily capable of causing death or serious bodily injury.” Serious bodily injury is that which “…creates a substantial risk of death or which causes serious, permanent disfigurement, or protracted loss or impairment of the function of any bodily member or organ.” And a person’s use of lethal force may be justified if he or she “…believes that such force is necessary to protect himself against death, serious bodily injury, kidnapping or sexual intercourse compelled by force or threat.”

So we have covered a lot of legal ground, but I believe this is knowledge that the responsible martial artist should “arm” themselves with. I’ll let Genwa Nakasone provide the tl;dr (too long;didn’t read) for those who have trouble with reading long-winded blog posts. This is from his explication of Gichin Funakoshi’s 20 principles of karate, found in “The Twenty Guiding Principles of Karate” (1938):

“…[I]n the event you are accosted by a thug or challenged by an aggressive troublemaker, you should try to avoid striking a mortal blow. You must hold as an essential principle that avoidance of injury to others with your fists and feet is your first concern. Even in an emergency one must strive to avoid striking a fatal blow…On the other hand, when circumstances beyond control cause practitioners to have recourse to action, they must respond wholeheartedly and without concern for life or limb, allowing their martial prowess to shine to the best of their ability.”

Go to part 1 in the series: Introduction