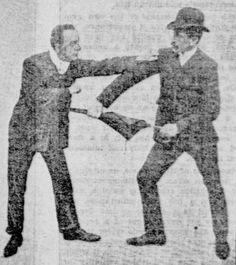 [This introduces a series of five articles that will discuss the elements necessary for a legal defense of “self defense” in the event one has found it necessary to employ lethal force against another person.]

Much of our class time and energy is spent honing our physical skills to deliver techniques to a target with fearsome velocity and power . We discover that we can use many parts of our body to stop a threat; we are, figuratively speaking, walking arsenals bristling with effective weapons. We learn what areas on the body make good targets (vital points) and how to get in position and to strip away a threat’s defenses to get at those targets.

We practice to “manage failure”: when something isn’t working, we flow directly to something else. We know that we have to seize the offensive in a confrontation and not yield that advantage until the threat is neutralized.

What we tend to neglect considering is what lines are drawn legally around the kinds of things we practice. Under what circumstances does the law consider physical force, of the kind we train for, legitimate and justified? Under what conditions would our actions cross over into misdemeanor or even felony behavior?

This is the area of law called “self defense” and in particular I’m thinking of what is termed “lethal (or deadly) force.” Usually this is considered to involve the use of a weapon that can cause serious (“grievous”) bodily harm, but it can also involve hands or feet, such as kicking someone in the head while they’re laying on the ground, or banging someone’s head against a hard surface like a wall or pavement.

What does the law say about martial artists, in particular, using the techniques they have practiced in the dojo to ostensibly protect themselves “in the street?” Turns out, statutory (written) law in the U.S., as far as I have found, doesn’t mention people with special training in describing acceptable use of force. There is no basis to the old “hands and feet as registered weapons” meme.

Case law regarding martial artists is spotty, too, although it does exist. I don’t feel like LARPing as a ‘legal eagle’, so in this series of posts, I’ll avoid the daunting prospect of diving into case law. Instead, I’ll focus on the broad aspects of statutory self-defense law in the U.S. generally and, when appropriate, on Pennsylvania’s laws in particular.

We can be on safe ground if we prepare ourselves both physically and mentally to stay within our legal rights when faced with a real confrontation. We already do this, in fact, to the degree we internalize the fifth plank of our dojo kun, “Refrain from violent behavior,” or, as Trotta Shihan translates it, “Never strike out in anger.” But in the heat of battle, or what may become a battle, it’s easy to freeze and not do everything in our power to protect ourselves or, conversely, to over-react and put ourselves in legal jeopardy. “I’d rather be judged by 12 than carried by 6” is a stale cliche.

This series will flesh out “Refrain from violent behavior” in the context of modern US/Pennsylvania law, and I hope, inform our training methods and mindsets so that, in the unlikely event we have to get physical outside the dojo, we avoid both the 12 and the 6. Stay tuned.