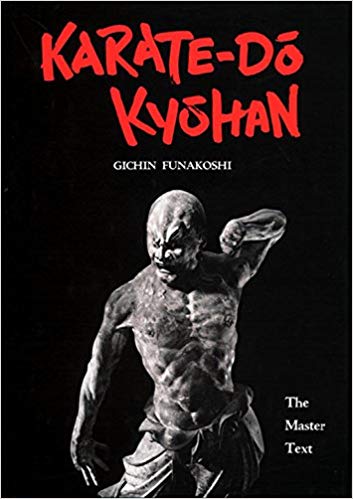 Lately I have been having conversations with some parents about how karate, when practiced sensibly, can benefit almost anyone physically and mentally, no matter what their starting condition. In talking about this, I mention that many of the Okinawan masters from the 19th century were reported to have been, or described themselves as having been, weak or sickly as children. An important resource for this topic is Gichin Funakoshi’s discussion of “The Value of Karate as Athletic Training” in Karate-do Kyohan, the master’s “master text,” as it were.

(“Karate-do Kyohan,” the book title, translates roughly into “Karate’s teaching example/model,” which suggests that Funakoshi thought of it as a textbook for teachers of karate.)

Below is an excerpt from Karate-do Kyohan, which Mr. Funakoshi first published in 1936. The English edition was translated by Tsutomu Ohshima and first published in 1973. Though written more than 80 years ago, this description of karate’s physical benefits is equally valid today.

The Value of Karate as Athletic Training by Gichin Funakoshi

“The nature of karate is such that it requires the body to move in all directions, in contrast, for example, to the emphasis on the arms in rowing or the legs in jumping. There is absolutely no need for concern about one-sided development of the body in karate, and the fact of uniform development may be considered to be one of the benefits of karate.

“In most cases, only a minute or two is required to complete a kata. Moreover, as one continues to practice, the movements become quicker and the training as a whole more vigorous, so that one can get ample exercise from a relatively short period of time. This is an ideal form of exercise for the many people today who complain that they would like to exercise, but they just do not have the time. The little time required is, therefore, a second major advantage.

“Almost no other form of exercise, be it judo, kendo, archery, swimming, or horsemanship, can be performed at any time or in any place as easily as karate. Most sports require a large area, equipment, or a partner, and in this regard as well, karate is the most adaptable. No specific are, equipment, or even partner is necessary, for it can be performed in a garden, living room, hallway, at any time or place that one feels the desire to practice. This is the third significant advantage of karate.

“Usually, exercise suitable for men is not suitable from women, and that for women is probably not enough for men; that for people recovering from illness is not enough for healthy people, and similarly, sufficient exercise for healthy, young people is too strenuous for older people, or young children. Karate, however, may even be practiced by the physically weak, by women, children, and by elderly people. In other words, since each individual may adjust the exercise to his own capacity, and with each unit of exercise being of but one to two minutes’ duration, there is no danger of overexertion or physical exhaustion.

“The fact that karate may be practiced either alone or in groups is a feature unique to it. Finally, even considered purely from the standpoint of physical techniques of practical value, the individual hand or foot movements, each with its own meaning, and the many variations in the various kata sequences become challenges to learn. While enjoying and being engrossed in their study on this basis, one accrues their benefits almost without realizing it…”